There's no place like home. When stepping over the doorstep, we can leave our daily worries behind and be our true selves. But what exactly defines the boundaries of our home? We refuse to believe that they are defined by the walls of the building. Everyone draws their own home boundaries – they can be set by people, flower beds or the horizon – and for some of us the entire world is home.

The ancient Greek philosopher Diogenes was the first man to declare himself a citizen of the world. Considering the material benefits superficial, he abandoned the customs and notions of society to lead a free and independent life, by taking refuge in a clay barrel. Diogenes invited his contemporaries to return to the simplicity of nature, and his conviction has gained new relevance today. In the constant consumerism race we have forgotten: if we want to, our homes can be the entire world. And who then needs all of this abundance of things created by the latest trends, which only anchor us?

Many architects have been occupied with the issue of minimal housing since the Renaissance. Also, Renzo Piano’s enthusiasm for the micro-house idea arose during his studies. At that time he did not have the opportunity to carry out such a project, but in the early 2000s, despite the fact that Piano’s office was working on several large projects, the architect decided to begin research work in order to find out the minimum that a comfortable home needs. He did not have any specific client, therefore his work culminated with a publication only.

After reading it, “Vitra” manager Rolf Fehlbaum contacted Piano and offered to work together to realise the results of the study in an actual house. “Vitra” has never considered itself just a manufacturer of design objects, and this project once again opened up a new opportunity to discover how design is capable of changing people’s lifestyles. Thus in 2013, the bright architecture selection of “Vitra Campus” was joined by the smallest building to date, which Renzo Piano named “Diogene” in honour of the first citizen of the world.

“Diogene” provides you with only what you actually need, and nothing more,” said Piano. The small dwelling for one person has indeed been furnished very ascetically: in the front part, which serves as a living room, there is a folding sofa on one wall and a folding table under the window on the other; behind the partition wall there is a small kitchen with built-in storage space, as well as a shower and a toilet.

The exterior of the building is also laconic: The archetypal form of the “Diogene” house tells the story of the primary refuge, but on closer inspection, it becomes clear that there is nothing simple about this home. “Diogene” is a well-functioning, self-sufficient system that operates independently of the infrastructure network. The building is equipped with solar panels, rainwater storage tanks, a biological toilet, natural ventilation and triple glazing. In addition, thanks to the small size of the building, it is easy to transport.

Although “Diogene” is a science and technology based research project, it is very romantic in its essence. The small building can be located almost anywhere and serves a wide variety of purposes: from a holiday home in the middle of the forest to a private office in the city backyard. However, the small size of the house deliberately does not allow us to meet all our human needs. It invites us to reassess the line between the private and the shared in order to enjoy life outside the walls of the house and to become part of the world. 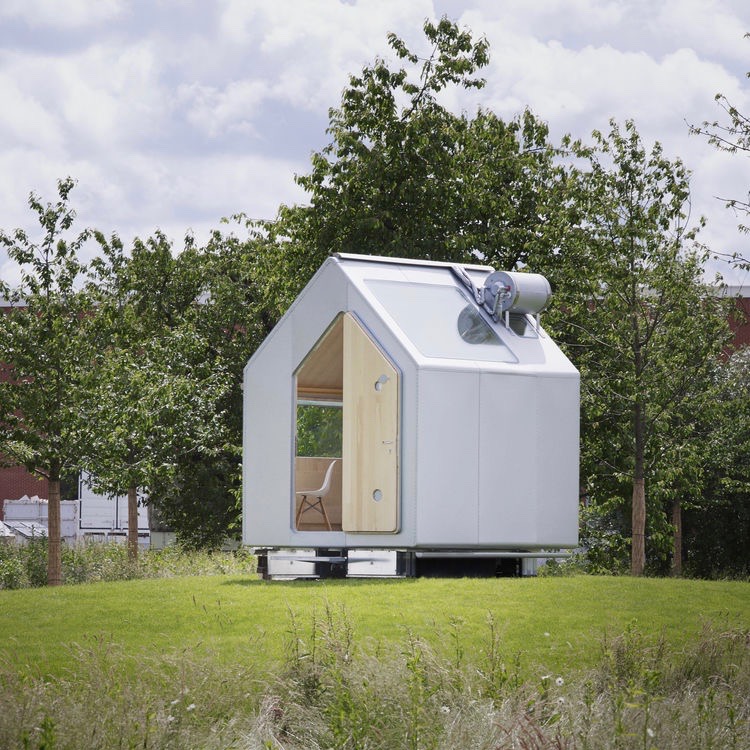 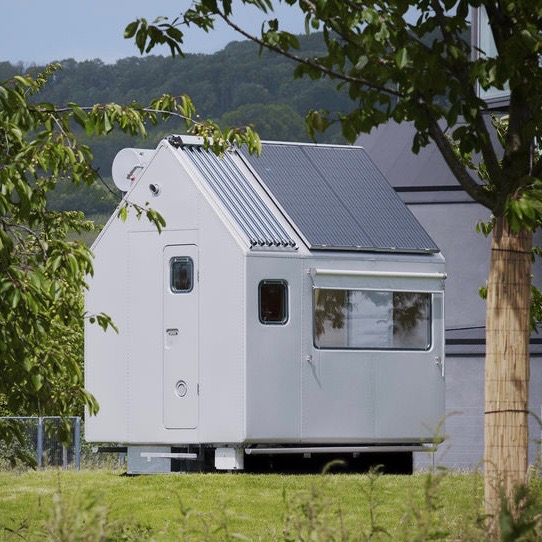 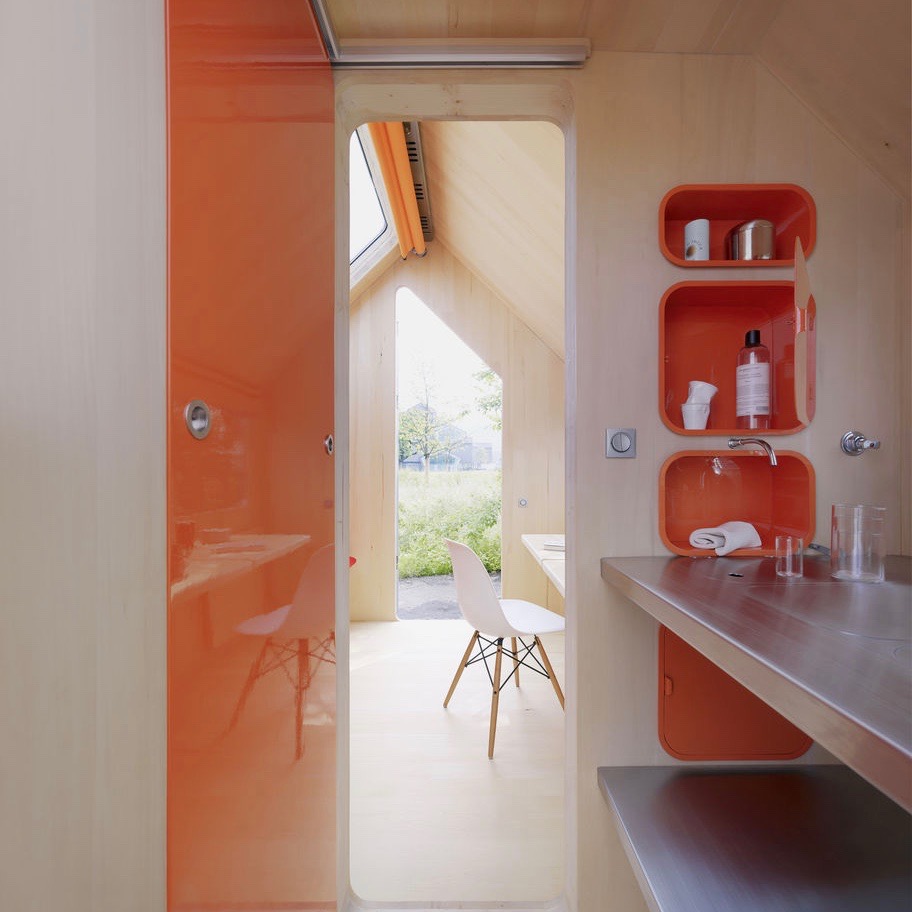 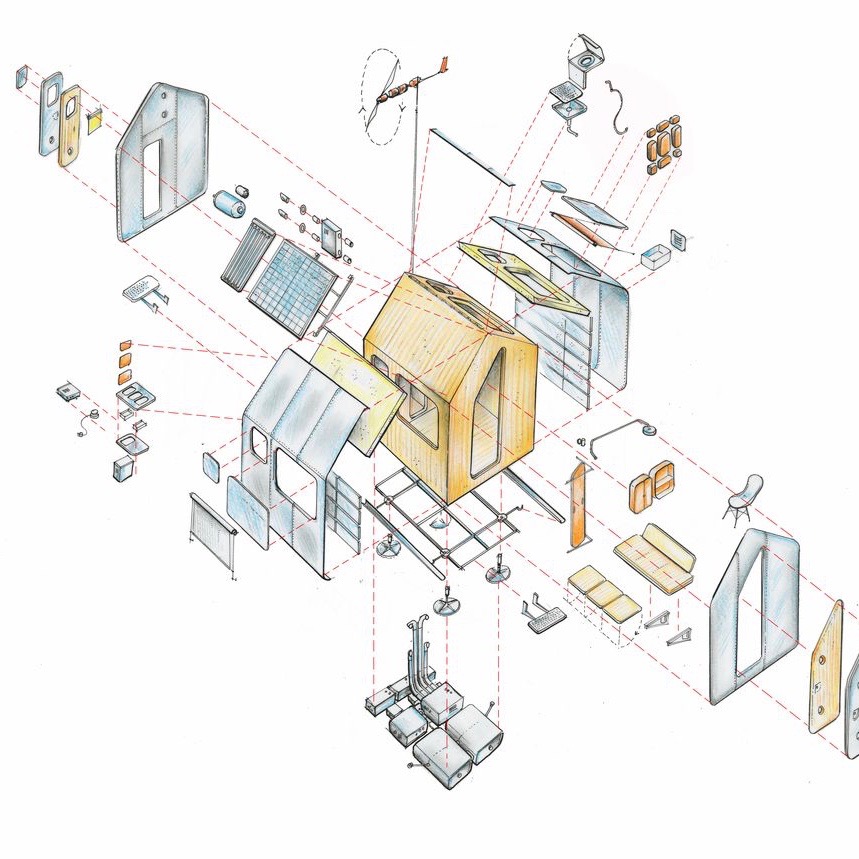